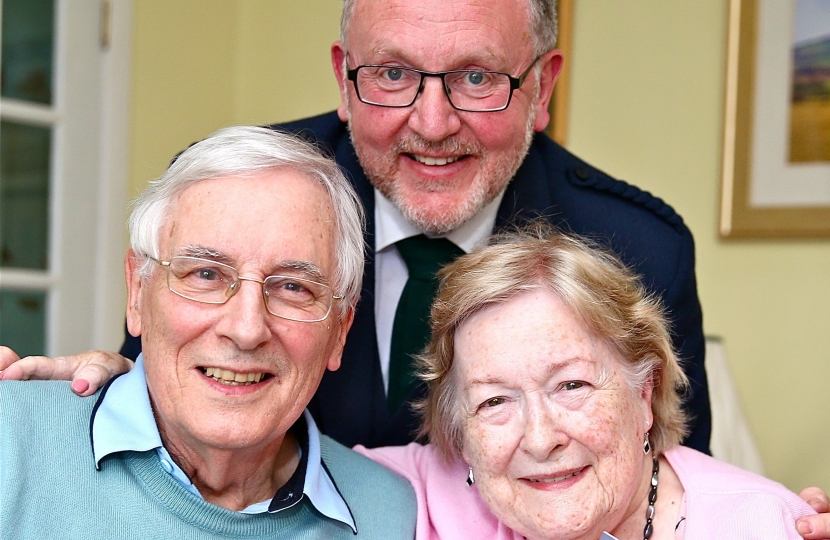 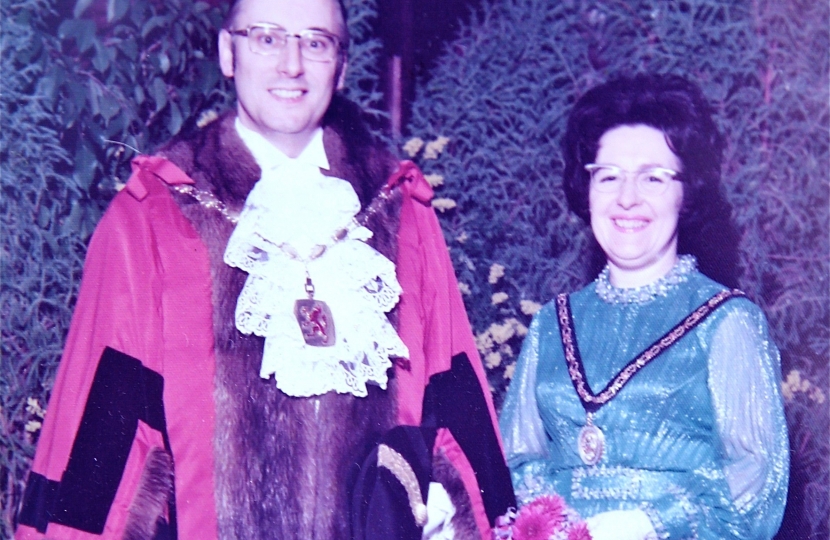 A FORMER leading London councillor, who has worked quietly behind the political scenes since retiring to Clydesdale, has received a special visit from Scottish Secretary David Mundell.

The local MP joined John Lindsay and his wife Anne at their home in Cardon Drive, Biggar to congratulate John after he was presented with an MBE by The Queen at Holyrood Palace for his long public and political service.

John, 83, and Anne, 79, moved to South Lanarkshire 19 years ago because they knew, and liked, the area. Both John's parents were Scots and his forebears farmed for five generations at Meadowflatt, near Thankerton and earlier built Covington Castle.

Born and brought up in the London area, the Lindsays both served as Conservative councillors on the London Borough of Enfield Council and were Mayor and Mayoress in 1975/76.

First elected at 25, John was youngest ever member of Southgate Council and was involved in a major 1964/65 local government overhaul in the capital when the number of borough councils was cut from 90 to 32.  It also resulted in the creation of the later axed Greater London Council (GLC).

A former council leader and deputy leader, John was 30 years a councillor while Anne served for 22 years. Both chaired key council committees.

After settling in Biggar, the Lindsays became active members of David Mundell's campaign team in all elections since Dumfriesshire Clydesdale and Tweeddale constituency was first contested in 2005.

Recalled John: "Our involvement began by chance when David came to our door while canvassing in Biggar during the campaign which led to him first being elected to Westminster.

"I recognised him right away from seeing his picture in local newspapers.  When I explained our political experience he persuaded us to get on board. The rest, as they say, is history.

"We've helped at all David's subsequent campaigns and our house has become his campaign HQ for Clydesdale."

John expressed surprise and delight at being presented with his MBE by The Queen.

He said: "Both Anne and I are a team in everything we do, including in our political work, so I feel the honour is as much for her as for me."

John is currently vice-president of the Clan Lindsay Society, has written a book on the clan's history while Anne is vice-chairwoman of Clydesdale Health and Social Care Forum.

The couple's contribution was warmly praised by David Mundell.

He said: "John's MBE is well deserved and I was pleased to congratulate him and Anne personally. They have done so much in local government and communities. It is good that has been acknowledged in this way."