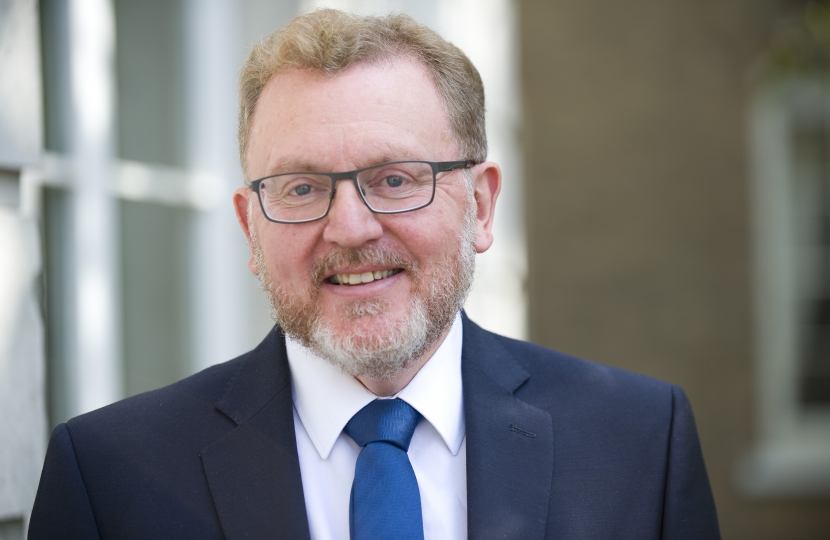 I was saddened to step down as Secretary of State for Scotland.

It was an immense privilege to serve in the role and I’d like to thank the two prime ministers I worked for – David Cameron and Theresa May – for the opportunity and for all the support they gave me.

I’d also like to wish their successor, Boris Johnson, and mine, Alister Jack, my very best wishes for the future.

We have had our differences but I made clear to Mr Johnson I was prepared to compromise and would work with him, to help deliver Brexit and to resist Nicola Sturgeon’s demands for a divisive second independence referendum.

Compromise is, of course, a dirty word in modern politics and the inevitable criticism was forthcoming from the usual suspects.

But our differences were significant and I was never prepared to remain silent about them.

So I always felt it inevitable that I’d not return as Secretary of State and Mr Johnston confirmed that to me in our meeting on Wednesday afternoon.

He wanted to mould his own Cabinet with his own people in place and I respect that.

Despite my own disappointment, though, I’m not downbeat at all.

I’m confident Mr Johnson and Alister Jack will do a good job for Scotland. I like to think they have some solid foundations to build upon.

I held the job for four years and two months, making me the longest serving Scottish Secretary since Ian Lang a quarter of a century ago.

But my time in the Scotland Office stretches all the way back to 2010, when I was appointed a junior minister in the Coalition Government.

The number of civil servants who have been there longer can be counted on the fingers of one hand.

So I’m sure no-one will begrudge me when I offer some advice based on my long experience.

And, right now, by far the most important thing I have to say to the new Prime Minister and Secretary of State for Scotland is this: deliver a Brexit that works for Scotland and whole of the UK.

Do that and the Scotland Office’s core mission – to strengthen our place in the Union – becomes so much easier.

I have previously set out my concerns about the impact of a no deal Brexit.  And during the Conservative leadership contest, I continued to highlight the difficulties it would present, especially for Scotland.

A disruptive Brexit threatens  businesses and it plays straight into the hands of Nicola Sturgeon.

I am prepared to take the new Prime Minister at his word when he said the chances of no deal were a million to one against.

So I’m not going to accept a barrage of scaremongering from the SNP and a First Minister who has consistently craved a no deal Brexit in the hope it will cause chaos and boost support for independence.

But the new Prime Minister must work hard to  ensure that does not happen.

Having listened carefully to everything he has had to say over the past few weeks, I’m hopeful.

He has been clear. He wants a deal. The chances of no deal, he has said, are a million to one against.

In our leadership hustings in Perth, he was asked whether he feared a no deal Brexit could imperil the Union.

His reply? “My first priority is the Union.”

He said “a sensible, pragmatic” Brexit would “entrench” and strengthen the Union.

I take the Prime Minister at his word, but I made clear to him at our meeting that I see my role as a backbench MP as holding him to account on his commitments to the Union and I will not shirk form doing so.

I also believe that this new Government shouldn’t be about a fresh start, it should be about business as usual.

We should keep working for a Brexit deal that delivers for Scotland and the whole of the UK – securing the kind of deal Scottish businesses have called for but the SNP have opposed at every turn.

That means friction-free trade with the EU.

It means seizing the opportunities of new trade deals.

From my trade trips to the Far East, South America, New Zealand and Scandinavia, I know the rest of the world wants to do business with us. And I know our exporters – world-beaters like whisky – would welcome new deals.

It means creating an immigration system that is UK-wide, just as businesses want, but flexible enough to meet specific needs around the country.

Finally, it means avoiding unnecessary barriers to trade within our UK internal market.

We know that’s that most important market for Scottish businesses by far – we do nearly four times as much trade with the rest of the UK as we do with the other 27 nations of the EU combined.

It is vital we continue to develop common UK frameworks to replace some of the EU rules and regulations that apply at present and ensure the nations of the UK take a uniform approach.

Those were my Brexit priorities.

Mr Johnson insists his are hardly any different and I am sure that is also case for the new Secretary of State.

My successor’s second task – which I know he will relish – is to strengthen the Union.

It is written into the mission statement of the Scotland Office (no wonder the Nationalists want to abolish the department!) and was my focus throughout my time in office.

In practice, it means highlighting the work of the UK Government in Scotland and showing how our system of devolution really can deliver.

I’m incredibly proud of what my team and I achieved in my four years as Secretary of State and I hope Alister is able to take the work even further forward.

The UK Government has invested £1.4billion in city and growth deals right across the country.

All our seven cities are covered and this month I announced details of the £400million Borderlands Growth Deal and £65million Moray Growth Deal.

These deals will give a massive boost to local economies and create tens of thousands of jobs over the next 10 to 15 years and show the benefits of when Scotland’s two Governments work together.

I hope every part of Scotland will now have a Growth Deal.

And there’s lots more the UK Government can do to benefit Scotland.

I was delighted to hear Mr Johnson’s pledge to compensate Scottish farmers over the loss of EU “convergence” payments recent years. It is vital he delivers.

I also hope my plan to enable the UK Government to spend more in devolved areas in Scotland can be actioned.

The UK Government is investing in Edinburgh’s new concert hall and funding the restoration of historic Perth City Hall through our city deal programme.

But let’s do more to demonstrate the value of the Union.

I believe the early signs are good.

Mr Johnson has made it very clear he has little time for the Nationalists and their obsession with independence.

He is as scunnered as most Scots are with the SNP’s invented grievances and House of Commons stunts, with their Brexit scaremongering, their bullying and blame games.

I know he will continue to oppose Nicola Sturgeon’s plans to hold a second, unwanted independence referendum next year.

That has to be reassuring given the alternative is Jeremy Corbyn, a man we all know would do a referendum deal with Ms Sturgeon in a heartbeat to take the keys to No 10.

So whilst sorry to be gone from Government, I’m far from downhearted. I have more time for my beautiful, but vast constituency and to spend time with my first grandchild, Isla, born just a month ago.

I am proud of my record as Secretary of State and particularly that during my time in office, there was no significant surge in support for independence despite all the Brexit noise.

Boris Johnston and Alister Jack will have my full support in their efforts to ensure that continues to be the case.