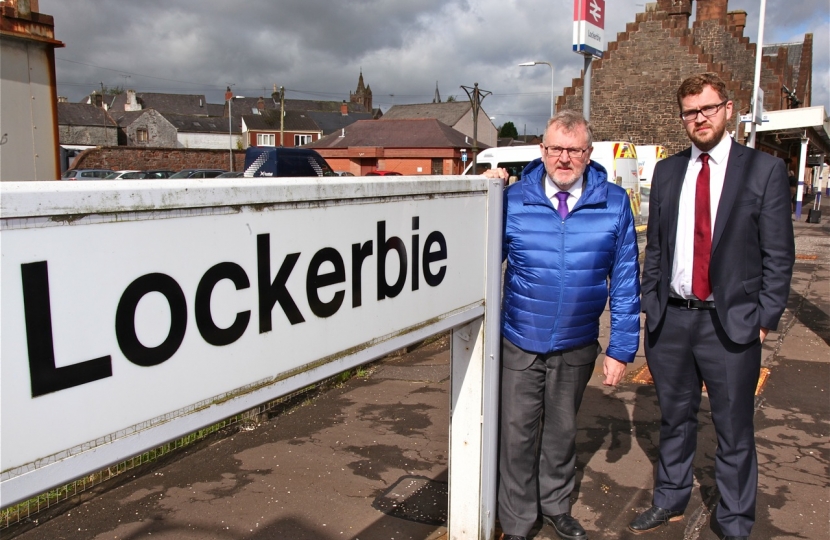 LOCAL MP David Mundell and constituency MSP Oliver Mundell have thanked 3,000 people who signed their petition to have 10.32 Lockerbie to Edinburgh service reinstated after it was axed in the December timetable changes.

The popular service operated by TransPennine Express allowed travellers from Lockerbie to spend a day in Edinburgh for medical, business, shopping or other reasons and is set to return as part of the newly published timetable.

The father and son political team argued strongly for the re-instatement of the service and were greatly aided by having so many people sign their petition in a short period, demonstrating how strongly people felt about the loss of the much-valued service.

Once Covid-19 temporary restrictions are lifted the new timetable, which had been due to start this month, will come fully into operation.

David Mundell MP said: “It's great to see the 10.32 service back, even though most people can’t use it just yet. It was an important part of the Lockerbie timetable and so many station users were surprised and disappointed to see it withdrawn in December without any credible explanation.

"We lobbied TransPennine hard to reintroduce the service and one of our strongest arguments was the level of pubic support for the service. Everybody who signed the petition made a difference in getting the service re-introduced.”

Oliver Mundell said: “The 10.32 service was very important to many Lockerbie Station users and always busy, which made TransPennine’s decision to drop it incomprehensible.

"Suggestions that there was a problem getting a slot at Waverley Station or congestion on the West Coast Mainline proved unfounded and so there was no reason why it couldn’t be reinstated, other than TransPennine making it happen.

"As soon as we launched the petition, we were inundated with people who wanted to sign it, reaching 3,000 in just a short time.  I’m sure the petition played a key part in getting the service back and I hope it is not long before local people can use it again."

David Mundell is also set meet to UK Transport Minister Chris Heaton-Harris MP next week to discuss how to secure improved reliability of TransPennine services at Lockerbie Station whenever rail services start to return to normal after the Covid-19 public health emergency.

Mr Mundell said: “Before rail services were adjusted for coronavirus, TransPennine admitted themselves service reliability was not good enough. We need to ensure that improvements promised are delivered.”