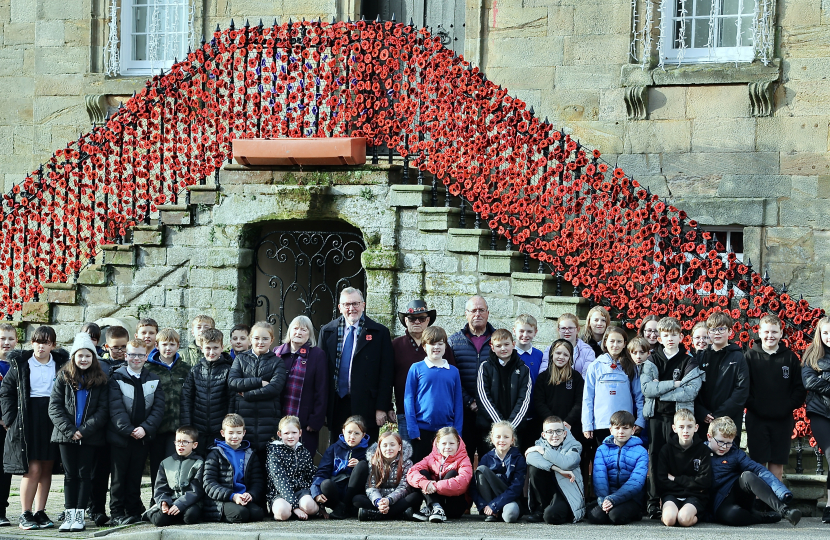 A CASCADE of knitted poppies, which was attached to the railings at historic Sanquhar Tollbooth during the recent remembrance period, may return in future years by popular demand.

The bold red display caught the eye of townspeople, visitors and the many travellers heading north on the A76 through the Royal Burgh prompting a large number of positive comments.

Anchored to a durable waterproof net, the work of a specialist craftsman in England, the initiative bridged the generations with the 1500 poppies being hand-made by volunteers, from primary school pupils through to senior citizens.

Shona said: “We got the idea from the large displays at the Tower of London and thought it would be nice to do something scaled to our own iconic building, the Tollbooth.

“The great thing was making the poppies brought the community together as there were so many people involved.  In particular it was fantastic to see the enthusiasm of the Sanquhar Primary pupils.

“It was a good way to acknowledge the contribution of the servicemen and women from Upper Nithsdale who served their country through the generations, some making the ultimate sacrifice.”

She added: “The net and poppies have been stored away carefully and we hope they can be used again at remembrance time in future years.”

Details of the Sanquhar Tollbooth display have also reached the UK Parliament at Westminster and the corridors of the Scottish Parliament at Holyrood.

Both local MP David Mundell and constituency MSP Oliver Mundell have shared pictures of the Sanquhar display with fellow politicians from other parts of the country who were equally interested in the concept.

“Locating the display on such a prominent building meant the contribution of our armed and other services, today and in past, was very much on the minds of those looking up at it from the High Street,” said David Mundell, after he visited the display.

He also met up with Shona, Ronnie, community council chairman Norman Burns along with primary school teachers and their pupils, who were all involved in the project.

The veteran MP added: “It is important we never forget and pass on the lessons of the past to our young people.”

Oliver Mundell, a wreath-layer at Sanquhar War Memorial on Remembrance Sunday, said: “The community effort behind the Tollbooth display, a reminder of the contribution of our service people over many years, demonstrated the very essence of the remembrance period.”