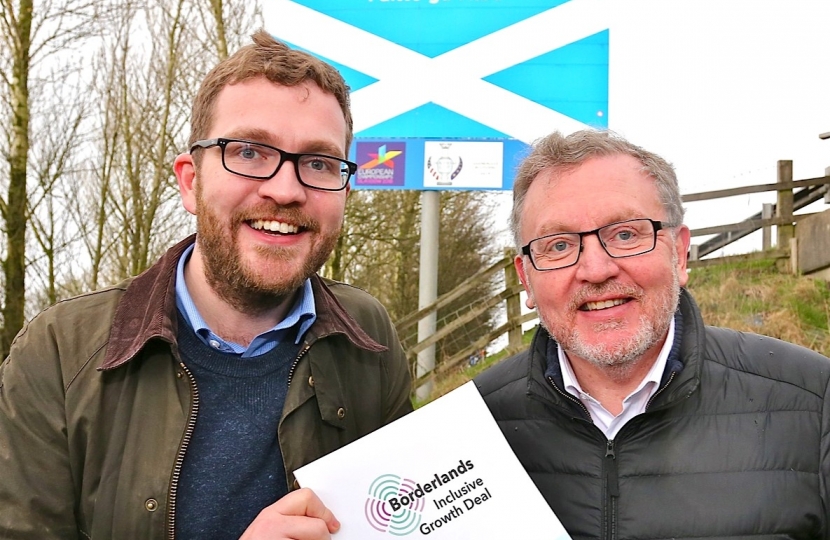 A LANDMARK deal, which is set to help boost the economy of the Borderlands for a decade and beyond, has been welcomed today by Dumfriesshire Clydesdale and Tweeddale MP David Mundell and Dumfriesshire MSP Oliver Mundell.

The investment was confirmed by the Chancellor of the Exchequer Philip Hammond while giving his Spring Statement in the House of Commons.

Dumfriesshire, Clydesdale ,and Tweeddale MP David Mundell expressed delight that £260 million had been secured from the UK Government towards the cross-border funding package.  An £85 million contribution from the Scottish Government will take the total to £345 million.

Mr Mundell said: "I'm very proud to have played a part by delivering the Borderlands deal from the heart of the UK Government.

"It will bring real benefits to constituents and do much to bring new jobs and opportunities in the context of a tough couple of years for the local economy.

"This is an example of both Scotland's governments working together for local people and recognises the importance of cross-border relationships.

“The deal will boost economic growth by helping existing business, encouraging new ventures and bringing a wealth of improvements to people who live and work in the area and to visitors.

“It is an ambitious approach to cross-border working between the governments, local authorities and partners and I’m confident that together we can create jobs and opportunity and bring investment."

He said: "Borderlands is the economic boost our area has been crying out for and will deliver a level of Government investment which for the first time in decades recognises the scale of ambition in our region.

"Importantly it recognises the day-to-day cross-border reality for many families and businesses in our area and the economic reality that what happens in Carlisle matters as much, if not more, to people living in Dumfriesshire as what happens in Glasgow or Edinburgh.

"Combined with the new South of Scotland Enterprise Agency this is a once in a generation opportunity to reverse the fortunes of our economy and create new jobs and opportunities to match."

The Borderlands Inclusive Growth Deal represents one of the most significant economic investment packages to be targeted at the region in decades.

It follows several years of planning and cross-border co-operation involving the UK and Scottish Governments, local authorities, regeneration organisations and such bodies as the Nuclear Decommisioning Authority (NDA).

One of the anticipated flagship developments supported north of the border would be at the one-time RAF Airfield and NDA-owned former Chapelcross nuclear power station site north of Annan.

Borderlands investment looks set to be a key component in delivering a state-of-the-art energy and business park on the substantial 95-acre development site which has conveniently close motorway, rail, high speed fibre and national grid connections.

The fully serviced complex will be designed to attract quality jobs and would appeal to power generating and storage companies and also businesses seeking reliable supplies of energy.

It would be one of the largest capital projects in the region since the construction of the new Dumfries and Galloway Royal Infirmary, the M74 motorway and the building of the Chapelcross nuclear power station in the late 1950s.

The South of Scotland economy will also gain from the work generated by UK Government-backed projects south of the border.

The planned new eight km southern by-pass of Carlisle and a major redevelopment around the city's iconic Citadel Railway Station should help drive employment and economic growth in the coming years.

In the Scottish Borders tourism looks set to benefit through investment in mountain biking facilities, including an Innovation Centre in Tweeddale.

Meanwhile, strategic infrastructure and transport improvements are high priorities across the Borderlands regions.