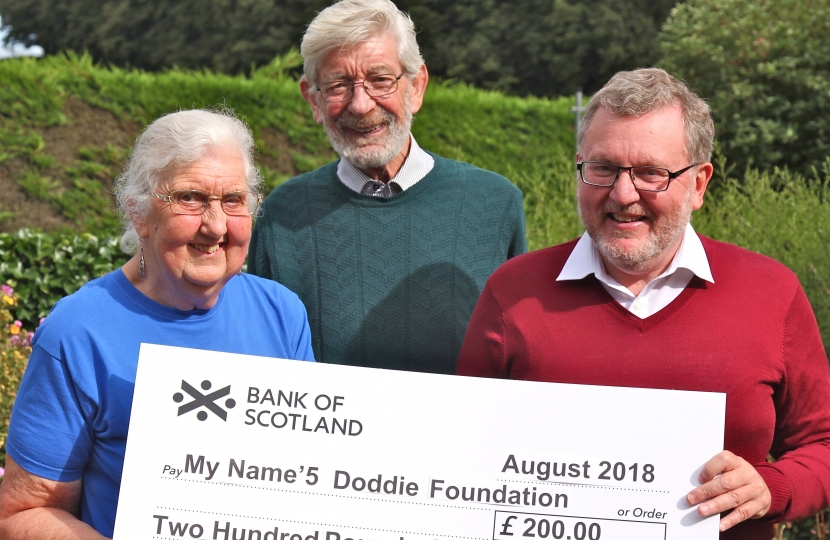 A SURVEY form completed by local MP David Mundell has given a Motor Neurone Disease (MND) charity a welcome boost.

The Scottish Secretary took time to give his views on a variety of topical subjects when he noticed that a charity of his choice would benefit.

He opted to donate the £200 offered by the research organisation to the My Name'5 Doddie Foundation, which was set up last year by former Scotland rugby union internationalist Doddie Weir, after he was diagnosed as having MND.

David had previously been impressed by the efforts of constituent Hilary Carmichael of Forest Cottages, Boreland, a prolific local charity fundraiser and rugby fan, who has organised a number of events for Doddie's foundation.

He said: "MND charities are very close to my heart and I know just how much work Hilary does for good causes, most recently for Doddie's foundation.

"The research work into MND and the support work being carried out are both equally important."

"Doddie, who turned out for Scotland 61 times, revealed last year that he had been diagnosed with MND, a progressive, degenerative disease that attacks the nerves in the brain and spinal cord.

"He launched the foundation to aid research into treatments and provide grants for people with MND to enable them to live as fulfilled a life as possible.

David, who represents Dumfriesshire Clydesdale and Tweeddale, said, like many people, he had known friends and colleagues who battled MND, including political researcher Gordon Aikman, the Better Together research director during the Scottish independence referendum campaign.

He died last year aged 31 after an illness in which he successfully campaigned to double the number of specialist MND nurses in Scotland, secured them NHS funding and also raised more than £500,000 for research.

She said: "We're delighted with David's support. Sadly there is no cure yet for this dreadful disease and the more we can raise awareness of MND and the work of charities, such as Doddie's foundation, the better."