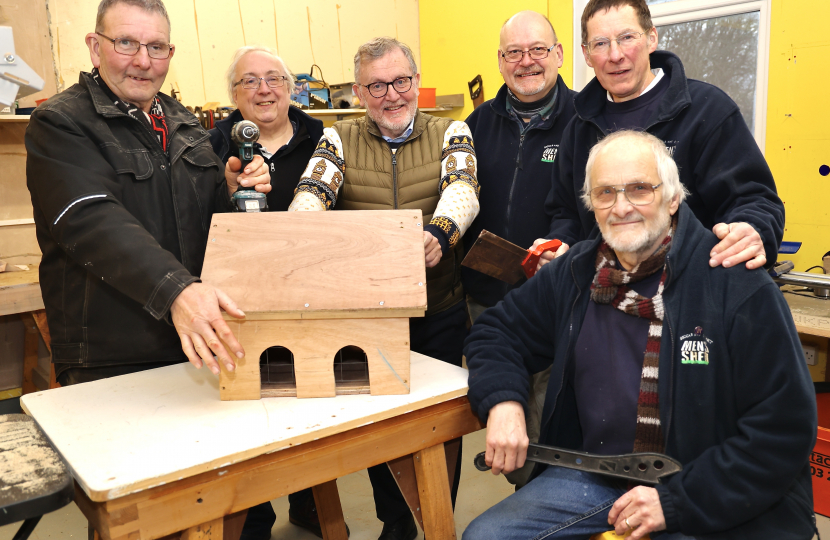 A LOCAL parliamentarian has backed ambitious plans to improve the rural base of Biggar Men’s Shed.

Dumfriesshire, Clydesdale and Tweeddale MP David Mundell has been briefed on exciting proposals for the former Walston Primary building, which is currently leased from South Lanarkshire Council.

The former Scottish Secretary, a member of the Men’s Shed, supports the campaign by the group to acquire the building permanently from the local authority through a community asset transfer.

He was given a tour of the 1890s constructed building, located at a scenic location five miles from the town, when he met with office-bearers and other members during the festive period.

Mr Mundell has written a letter of support for the organisation, promoting their ambitions and efforts to attract project funding.

He said: “I am impressed by the extent Biggar Men’s Shed work with other local groups in the community, especially those supporting young people.

“They have a large pool of experience, from professions and trades through to arts and crafts, which they are putting to good use enhancing the premises and surrounding grounds, which include a polytunnel and garden area.

“Perhaps most importantly, The Shed is a welcoming social environment, having a positive impact on general well-being and mental health. The members aim to draw in the wider community as much as possible.”

Mr Mundell welcomed the wider growth of the Men’s Shed movement in communities across his constituency and stated he took great pride in being a member.

Committee chair Ranald McGregor and secretary Stuart McKay explained that although the Biggar Shed was founded in 2018 progress had been understandably stalled by the pandemic.

Mr McGregor said: “Since we secured the lease for the old school, things have started to move forward and we now have 45 members.

“There is a huge amount of work to be done to bring the building up to the standard we need and make it suitable for all our activities and hopefully for wider community use.

“It is a fantastic site and, although we are out of town, it is quite central and convenient for much of our membership which is also drawn from the wide area surrounding Biggar itself.”

Meanwhile, Mr McKay believes developing a workshop, arts area, community garden and meeting rooms and attracting funding would be greatly assisted by The Shed securing direct ownership of the property through a community asset transfer.

He said: “That is one of our key goals and amongst our priorities is establishing a positive dialogue with the local authority to take the proposal forward.”

Shed members tend to be older in age, many retired, but everyone 18 or above is welcome to join.

Younger men, including some between jobs, have been amongst those joining sessions, enjoying the company and picking up extra knowledge and skills.

Biggar Shed members have an extensive pool of experience. Their career backgrounds include electrical, joinery, construction, computers and a variety of professions including a former airline pilot.

Their current sessions are Wednesday and Thursday, 10.00 to 4.00 pm, although they eventually hope to extend their hours to include weekend periods.