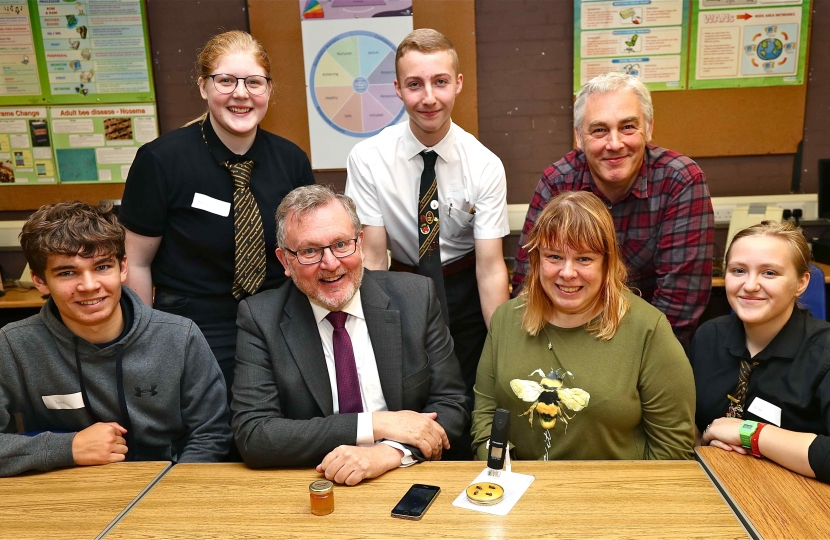 PUPILS at Annan Academy are taking part in groundbreaking research into why the honey bee population is in decline.

They are collecting bees from hives at different locations and stages in their lifespan for testing to see if they have any diseases.

The research is being carried out in partnership with Kelso High School in the Scottish Borders, which also has its own bee hives.

Work is taking place in the schools' own classroom labs, supported by testing using state-of-the-art equipment at the Roslin Institute animal sciences centre near Edinburgh.

The pupils will have the opportunity to present their findings at the Royal Society in London on November 19.

Students from both schools were joined at a session by local MP and former Scottish Secretary David Mundell where he learned more about the important work.

Annan Academy teacher Lorraine Johnston, who is also chairwoman of the South of Scotland Beekeepers Association, stated that there was concern about a fall in bee populations internationally.

Amongst possible causes, she explained, were climate change, easier spread of infections, pesticide use and reduction in bee friendly habitats.

But Lorraine and colleagues at Kelso High School, which also keeps bees, are keen to encourage more young people to become involved in beekeeping.

She said: "Giving young people the chance to learn more about practical beekeeping, particularly in a rural area like ours, not only helps sustain the local bee population but may encourage some pupils to take up the hobby.

"Bees are vital pollinators and an important part of the ecosystem and learning about them has wider educational value."

Both Annan Academy and Kelso High, which work closely together, are the first secondary schools in Scotland to offer a National 5 qualification in beekeeping.

Mr Mundell welcomed the opportunity to see the valuable work being carried out at Annan Academy and hoped to return again to learn how the project was progressing.

He said: "This hands-on involvement in looking after bees, and facilitating honey production, is an excellent gateway for pupils to learn more about ecology and wider conservation issues."