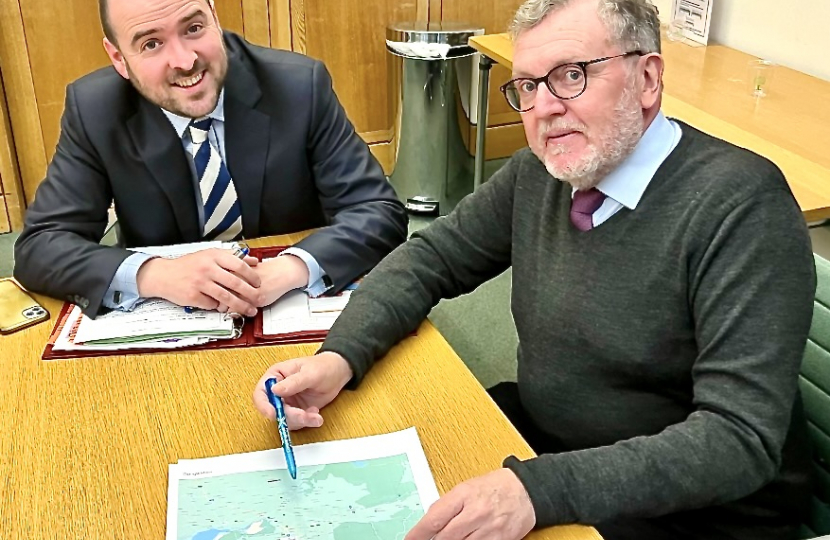 The meeting adds momentum to a campaign aimed at increasing the profile of the Muckle Toon launched last year by the Langholm Alliance’s Eskdale tourism officer Sharon Tolson.

Mr Mundell explained to the Minister that whilst the beautiful rolling border hills, remoteness and the town’s traditions were part of its charm, the community was proving unnecessarily difficult to find for some travellers because of the absence of adequate sign-posting.

“I was grateful to the Minister for the opportunity to brief him first-hand on the negative impact lack of suitable road signage at key locations was having on the increasingly important tourism sector in the Esk Valley,” explained Mr Mundell.

“He took on board all the points I made and I understand he will look at what options are available to improve the situation. There is strict criteria laid down for the provision of place signs on trunk roads by the relevant authorities.

“A priority for the Alliance would be to have Langholm mentioned on a sign for the A7 route to Edinburgh from the roundabout beside the M6 at Junction 44 north of Carlisle.

“They are also seeking better signage for Langholm on routes from the M74 north of the border and the A75, which would be a matter for Transport Scotland.”

A LOCAL parliamentarian has backed ambitious plans to improve the rural base of Biggar Men’s Shed.